The metal detectorists found a hoard, didn’t report it, and sold most of it – and now they’re jailed for a very long time. “The hoard — much of which is still missing — could shed new light on a period when Saxons were battling the Vikings for control of England. The trove is thought to have been buried in the late 9th century by a member of a Viking army that was being pushed east across England by an alliance of Saxon forces.” – The Washington Post (AP) 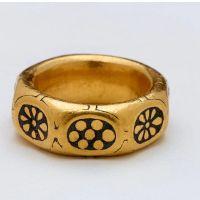