And the problem is that men somehow still think that no matter what women write about, it’s “domestic.” One playwrighting contest judge: “There is still an element of surprise when a woman writes a play that doesn’t have domestic concerns, and there is no element of surprise when a man does it. So the woman who manages to do it is seen as an anomaly rather than the norm.” Hey, 2019. – The Stage (UK) 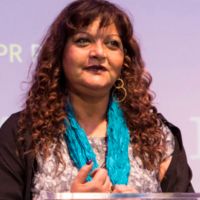