It’s a holiday miracle: People willing to part with their money for a classical music-prog rock mashup, especially at the holidays. But how did we get to this elaborate two-band tour setup that begins in Council Bluffs, Iowa, and extends around the entire continental U.S.? The founder, Paul O’Neill. “In the early ‘90s, O’Neill began to plot a holiday-themed live spectacle that combined progressive rock, heavy metal and classical music with elaborate stage productions” ever more elaborate by the year. – Billboard 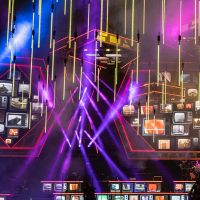