It was ten years ago that the Palau de la Música Catalana’s name was all over Spain’s newspapers: €24 million had disappeared from the hall’s bank accounts in a corruption and kickback scheme that involved the Palau’s director; the president of Orfeó Català, its resident choral society; the transportation and infrastructure giant Ferrovial; and one of Catalonia’s major political parties. Here’s the story of how the crime was discovered and solved and how the Palau and Orfeó redeemed their reputations. – Bachtrack 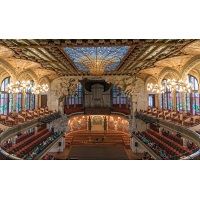