In the $450 million project announced four years ago, two smaller buildings and a plaza have already been added to the MFAH’s campus. The expansion’s centerpiece, the 183,528-square foot Kinder Building, is now scheduled to open next fall, with a grand atrium, two conference rooms, a 200-seat auditorium, a pair of restaurants, and 15 galleries. – Houston Chronicle 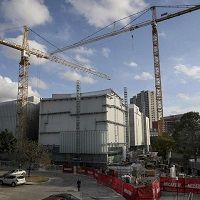