“The shock of the first modern, ‘industrial’ war extended far into the 20th century and even into the 21st, and changed how people saw the world and themselves. And that was reflected in the cultural responses to the war – which included a burgeoning obsession with beauty and body image, the birth of jazz, new thinking about the human psyche, the Harlem Renaissance, Surrealism, and more.” (audio) – WNYC (New York City) 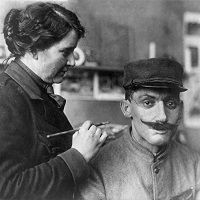