A researcher in the 1940s suggested that the tablets had recipes on them, but – shocker! – her fellow researchers didn’t believe her. And yet, she was right. “So far, the cooking team — which also includes a food historian, a curator, a chemical biologist specializing in food, a professional chef and an expert on cultural heritage — has re-created three stews. ‘One is a beet stew, one is vegetarian, and the final one has lamb in it.'”- NPR 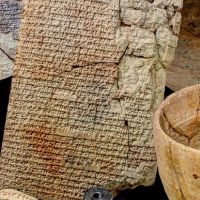