“Police have said they plan to seize six religious sculptures that are on display at an art museum in the Belgian town of Leuven. The authorities acted following a complaint by a Belgian church that has long sought to reclaim the fragments of a 16th-century altarpiece, which were stolen at the outbreak of World War I” and ultimately ended up at Rotterdam’s Museum Boijmans Van Beuningen. – Artnet 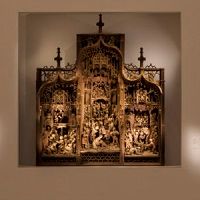