Freddy Tsimba uses all kinds of materials to respond in sculpture to his hometown of Kinshasa, Democratic Republic of the Congo. “In 2014 he took a house he had built from 999 machetes to one of Kinshasa’s busiest markets. He stood silently beside it and listened as people argued about what it meant. ‘The reaction was intense,’ he says. ‘People here are still traumatised by the Kulunas,’ a group of machete-wielding youths who rob and kill. Eventually, Mr Tsimba told the crowd he wanted to show that the machete was not just an instrument of death. It was invented for farmers to cut weeds and crops. It could become whatever you made of it—even a house.” – The Economist 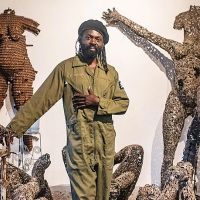