Washington starred in the play on Broadway. So why take it to Netflix, of all places? Washington: “Not everybody has $200 to go and see a play on Broadway. … The economic diversity of our audience was really important to me, but also the global diversity of our audience, because violence with the police and bias with the police is not just an issue in the United States.” – Variety 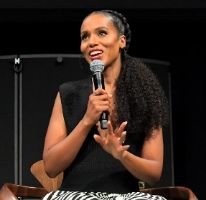