“Bell is only the second holder of the music director role at the Academy, succeeding the Academy’s founder Sir Neville Marriner, who held the post from the orchestra’s formation in 1958 until 2011 … The violinist first collaborated with the orchestra in 1998, when he was 21 years old, in a recording of Bruch and Mendelssohn concertos, with Marriner conducting.” – The Strad 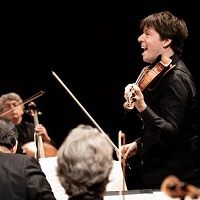