“Pierre and Danielle Le Guennec were first given two-year suspended terms in 2015 after being convicted of possession of stolen goods over the huge trove of works by Picasso, including nine rare Cubist collages and a work from his famous Blue Period. That verdict was upheld in 2016 by a higher court but then quashed by the Cour de Cassation, which ordered a retrial. The former electrician, 80, and his wife, 76, were not in court Tuesday when they were found guilty for a third time.” – Yahoo! (AFP) 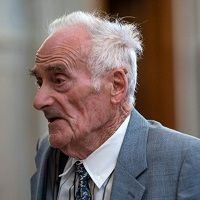