Shortly after the start of Wednesday evening’s performance of this production — well-known for casting Black actors as the Loman family — audience members began to hear dripping water. About half an hour in, the sound got louder and then a portion of the ceiling crashed into the auditorium. The 1,200-seat Piccadilly Theatre was quickly evacuated, the show was cancelled, and star Wendell Pierce met the audience outside to apologize. – WhatsOnStage (UK) 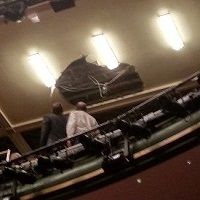