“‘Keep your fingers straight and off the trigger. Do not point the rifle at anyone you do not intend to shoot.’ That’s Roman Baca, a U.S. marine and Iraq War veteran. But he’s not speaking to the company of soldiers he led during his tour as a sergeant in Fallujah, Iraq. Here, Baca is instructing a company of ballet dancers” in the documentary short Exit 12: Moved by War. (video) – The Atlantic 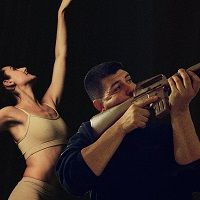