Scott first became (in)famous 30 years ago with his installation What is the Proper Way to Display the American Flag?, which has incited controversy virtually every time it has been exhibited since 1989. This weekend will see his largest-scale project: a re-enactment of the 1811 German Coast Uprising, in which up to 500 enslaved people marched on New Orleans from nearby sugar plantations. Perhaps surprisingly, Scott is doing this with the support of Louisiana officials. – The New York Times 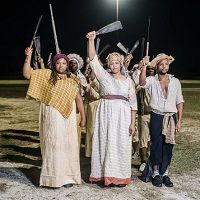