Maybe it’s true that if Lord Elgin had not taken the sculptures they would have been destroyed, by the Turks or the Venetians or the pollution in Athens. And it is true that, as stated in the Times article, the Parthenon sculptures are accessible, and free to six million visitors a year. But Athens gets visitors, too, and Greece is no longer under the Ottoman Empire—in 2021, it will celebrate two hundred years since the beginning of its war of independence—and it can take care of its heritage. – The New Yorker 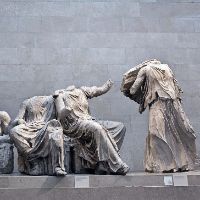