“The 69-year-old [author of I Will Never See the World Again] was arrested in 2016 with his brother, the economist and journalist Mehmet Altan, on allegations of spreading ‘subliminal messages announcing a military coup’ on television. Alongside journalist Nazlı Ilıcak, the Altan brothers were charged with attempting to overthrow constitutional order, interfering with the work of the national assembly and the government.” – The Guardian 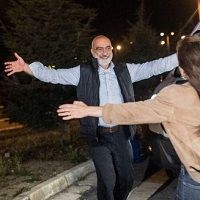