For example: “There’s nothing revolutionary about an artist creating a foundation. But the nonprofits set up by Andy Warhol, Joan Mitchell and Robert Rauschenberg, to name three, were created to launch after the artist’s death. Bradford, 57, founded Art + Practice for immediate impact. He provides as much of the organization’s $1 million annual budget as needed. And he does it his way, generally declining grants so that the nonprofit can remain independent and flexible.” – Washington Post 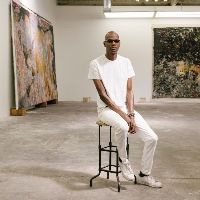