“He built the world’s first film studio, yet had little interest in movies as entertainment. He was a showboating maestro of public relations, but he often turned down invitations and celebrations that would force him to leave his laboratory. He was a workaholic whose final résumé boasted 1,093 patents and countless inventions—including the incandescent light bulb, the phonograph, the alkaline battery, the X-ray fluoroscope, and the carbon-button microphone. Yet his most important idea wasn’t something anybody could patent or touch.” – The Atlantic 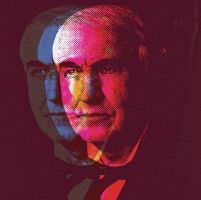