“Ms. Abrera, 41, joined Ballet Theater in 1996. Five years later she was promoted from the corps de ballet to the rank of soloist. A serious injury in 2008 made further advancement difficult, but she fought her way back to health and was made a principal dancer in 2015. Ms. Abrera, who was promoted on the same day as Misty Copeland, became the company’s first Filipino-American principal.” – The New York Times 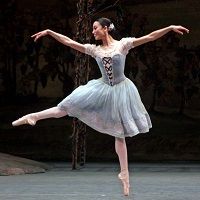