“It can’t be overlooked that San Francisco has some heavyweight car-free peers. Once, pedestrianized urban cores were largely the domain of enlightened mid-sized cities in northern Europe. But now Paris and Barcelona have expanded the concept, and Toronto is mulling a car blockade for multiple downtown corridors. London charges a pricy fee for vehicles entering its busy streets, and New York City will follow with its own congestion pricing scheme in 2021.” – CityLab 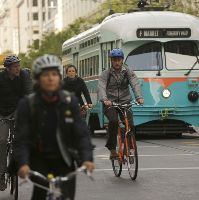