Shortly before she died in 2007, philanthropist Linda Pace had a dream in which she saw a shining red counterpart to the Emerald City in The Wizard of Oz which would hold her art collection and make it available to the public. A dozen years later, Ruby City has opened, with a building (yes, it’s red) designed by David Adjaye. – San Antonio Current 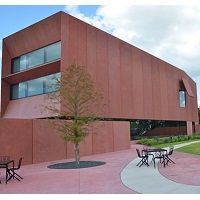