Named for Rocinha, with 70,000 residents the largest favela in Brazil, Rocywood is a production company formed by five young Rio filmmakers. Their budget per film averages around $50 (US), with favela residents providing everything from the cast to rented equipment to hair and makeup. “The films, made for locals by locals, are screened on the streets of Rocinha using a projector and an improvised tarp as a screen, but are also available on YouTube for a worldwide audience to see.” – Hyperallergic 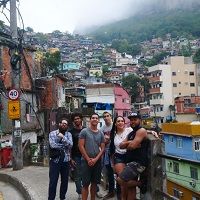