“The once-beloved institution that has been closed for four years has delayed the [planned Nov. 3] reopening of its new Pennsylvania Avenue space. … Some of the delay was caused by unforeseen problems in the federally owned building that had to be fixed, according to a museum official, and the additional work was slow to be approved by federal officials.” – The Washington Post 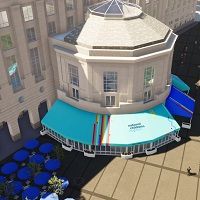