Plautilla Nelli’s 23-by-6½-foot depiction of Jesus and his disciples was painted for her sisters at a convent in Florence in 1568. When that convent was shuttered by Napoleon’s forces in 1808, the canvas was moved to a nearby monastery, where it was hanging in a (very) humble refectory when it was discovered by an art historian in the early 1990s. And it’s actually thanks to Napoleon that the painting is now on view in a museum. – Atlas Obscura 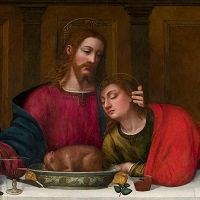