“[He] was distinguished in at least three fields. As a photographer in the 1950s and ’60s he made memorable images of contemporary American writers and painters, and of the young Bob Dylan soon after the singer’s arrival in New York. As a film-making musicologist he documented traditional arts in the American South and in Peru. And as a musician, particularly as a founder member of the New Lost City Ramblers, he had an incalculable influence on the American folk revival and all that followed.” – The Guardian 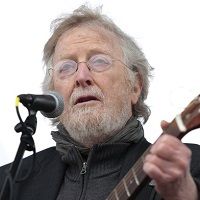