“The original manuscript of the story no longer exists, with the oldest versions of the story believed to have been transcribed by the poet Teika, who died in 1241. Until now, just four chapters of the 54-chapter story are confirmed to be Teika’s transcriptions, but now a fifth chapter, which depicts Genji’s encounter with the girl who becomes his wife, Murasaki, has also been identified as Teika’s. The manuscript had been kept in an oblong chest in a storeroom at the Tokyo home of Motofuyu Okochi, a descendant of [a] former feudal lord.” – The Guardian 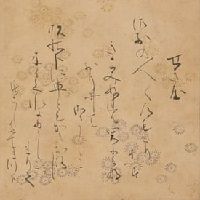