For music fans, the news last Thursday that WNYC will end New Sounds, a show hosted by John Schaefer since its debut in 1982, has provoked a deep sense of mourning and nostalgia for both the show and the city’s eroding arts and culture scene. Over four decades, the eclectic music program had come to be seen as a proud local institution that reflected New York City’s sophistication and idiosyncratic personality. – Gothamist 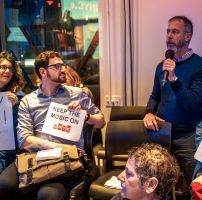