In 1999, a small college in Kilgore, TX — in an area where, at the time, gay men were routinely beaten and sometimes murdered — staged Angels in America, angry protests from local fundamentalists led to a showdown that attracted national media attention. Wes Ferguson, who edited the college paper at the time and whose sensationalist headline on a preview story ignited the fury, recounts how it went down and talks to some of the key participants about how they, and the town, were changed by the furor 20 years ago. – Texas Monthly 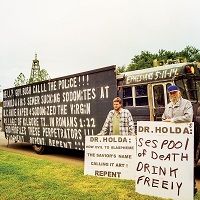