Clark was “an African-American expressionist painter who used a broom and bold colors to capture the natural world and to convey emotions about the racial injustice of the 1960s, earning him international acclaim.” Clark, who lived in Detroit, was known for his experimentation with shaped canvases, bold colors, and a seven-decade career. – The New York Times 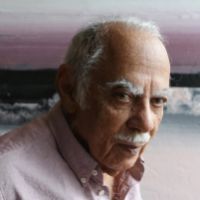