The Studio Acting Conservancy was just starting demolition work at a former church that will be its new home in Washington, D.C.’s Columbia Heights when the crew boss called the theatre’s founder, Joy Zinoman, to tell her about a discovery, “an enormous frieze of the Last Supper that was hidden behind drywall for more than a decade.” And now there’s a bit of a problem: “Acting studios are supposed to be bare.” – Washingtonian 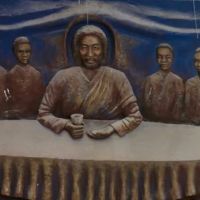