William Paul Gerhard, an engineer with the British Fire Prevention Committee, stated in a report that by May 1897 there had been 1,115 recorded theater fires in Europe and America (since records had been kept); there were 460 theater fires across America and Europe just from 1800 to 1877. Gerhard claimed that the average life of a theater in the United States was only about thirteen years due to fire. – Lapham’s Quarterly 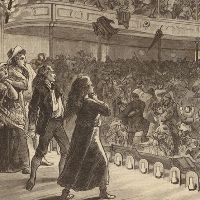