“We construct top-10 lists for movies, games, TV — pieces of work that shape our souls. But we don’t sit around compiling lists of the world’s most consequential bits of code, even though they arguably inform the zeitgeist just as much. So Slate decided to do precisely that. … The editors polled computer scientists, software developers, historians, policymakers, and journalists. They were asked to pick: Which pieces of code had a huge influence? Which ones warped our lives?” – Slate 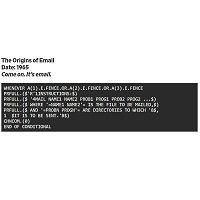