Truly they are, and it’s probably because of humans. But in what way? “In a study last year that analyzed more than 1 million individual recordings of whale calls, scale shifts were found across species, and among populations that don’t necessarily interact with one another. Which is to say, whatever has triggered the change doesn’t seem to have a specific geographic origin.” – The Atlantic 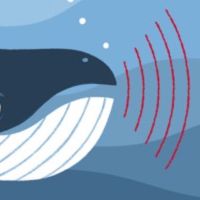