“These tufty mammals are the stars of Philippe Quesne’s The Moles, which ran at N.Y.U. Skirball over the weekend and kicked off with a Friday afternoon parade through the West Village. A rock concert, a nature mockumentary, a collective hallucination and a goof on the idea of underground theater, The Moles welcomes audiences, wordlessly, to Caveland, a stalactite-studded subterranean lair that the moles invade and then enjoy, sometimes in the company of a neighborly purple teddy bear.” – The New York Times 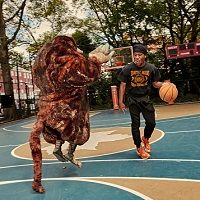