Magnus is part of a wave of smartphone apps trying to catalog the physical world as a way of providing instantaneous information about songs or clothes or plants or paintings. First came Shazam, an app that allows users to record a few seconds of a song and instantly identifies it. Shazam’s wild success — it boasts more than a billion downloads and 20 million uses daily, and was purchased by Apple for a reported $400 million last year — has spawned endless imitations. There is Shazam for plants or Shazam for clothes and now, Shazam, for art. – The New York Times 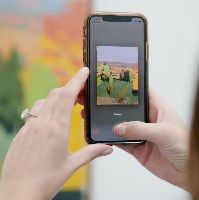