Enrique Mazzola, who is currently the principal guest conductor at the Deutsche Oper in Berlin and was until recently artistic and music director of the Orchestre National d’Île-de-France in Paris, declined to give his age, describing himself as “old enough to take the position of music director, and young enough to take it with energy and enthusiasm.” – The New York Times 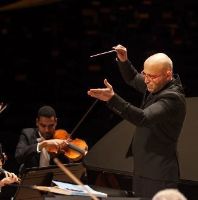