“In [Autonomies], set in the near future, civil war has cut the land into two countries. The coastal State of Israel is nonreligious, with the cosmopolitan city of Tel Aviv as its capital. Jerusalem is a walled, autonomous city-state, run by [ultra-Orthodox] Haredi rabbis. At first glance dystopian, the show is in fact an artistic extrapolation of real-life rifts in Israeli society.” – The Guardian 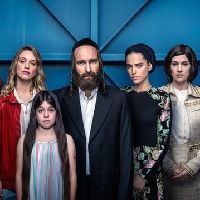