“As a recent graduate with a BFA in acting, I could have been stuck lip-synching to Buddy Holly at an amusement park or being cast as a Native American in a problematic outdoor drama in Chillicothe, Ohio. But here I was doing something respectable; noble, even.” Jeremy D. Larson recalls the three-hour load-ins for 8 a.m. shows. The flu passed from cast member to cast member when no one could sit out a show. The drink and drugs. The streaking. And the time they made the mistake of uttering the title of The Scottish Play out loud – The Outline 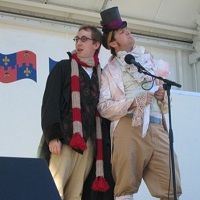