Kathryn Lewek just finished a run as Eurydice in Offenbach’s Orpheus in the Underworld at the Salzburg Festival, one of her first performances since giving birth earlier this year. After a few German and Austrian critics, as she puts it, “[wrote about] postpartum mom-bod instead of reviewing the show,” Lewek took to Twitter to call them out (not by name). Manuel Brug of Die Welt (who had described Lewek and her colleagues as “fat women in tight corsets spreading their legs”) responded to Lewek’s complaint by writing, “If she is so sensitive why is she showing herself the whole time in this corset?” And the just wrath of the Twitterverse rained down upon him. – BBC 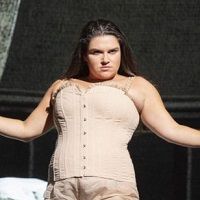