The lockout began in May because there has been no musicians’ contract since January and management, which wants to end the orchestra’s year-round status and shut down during the summers, decided to cancel all this summer’s programming; the musicians wanted to play on and keep negotiating. But management’s stated intention has been to resume the orchestra’s activities with the start of the fall season — and now the musicians are saying they won’t play without a contract. – The Baltimore Sun 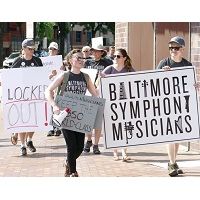