“After [premiering at] Venice, American Dharma screened at the Toronto and New York film festivals and picked up strong reviews. But the idea of Bannon getting a platform at all ignited a backlash … that made the film radioactive for buyers. … [Now] Utopia, co-founded in February by musician and director Robert Schwartzman (nephew of Francis Ford Coppola), has acquired U.S. rights to the film from the Oscar winner behind The Fog of War.” – The Hollywood Reporter 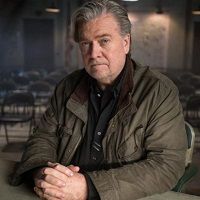