Francis Ford Coppola: “No one wants to make a pro-war film, everyone wants to make an anti-war film. But an anti-war film, I always thought, should be … something filled with love and peace and tranquility and happiness. It shouldn’t have sequences of violence that inspire a lust for violence. Apocalypse Now has stirring scenes of helicopters attacking innocent people. That’s not anti-war.” – The Guardian 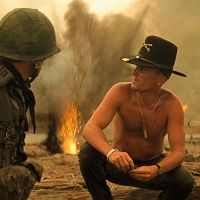