The 376-foot sculpture was commissioned by Johnson, then London’s Mayor, for the 2012 Olympics, and he had hoped that it would become London’s answer to the Eiffel Tower (7 million annual visitors) or the Statue of Liberty (over 4 million). But Orbit never even cracked the 200,000-visitor mark — not even after it was bailed out by tycoon Lakshmi Mittal (which is why it’s now named ArcelorMittal Orbit) and Johnson had Carsten Höller add a sliding tube for which admission is now £17.50 ($21). (Maybe that’s why visitorship is down more than 20% from its peak.) Total debt on the contraption is now £13 million ($15.7 million). – Artnet 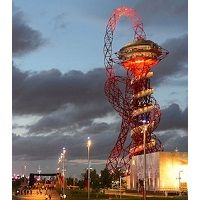