Sergey Chernyshev, 18, began learning breakdancing from his father, also named Sergey, who picked it up from VHS tapes that made it into newly de-Sovietized Russia in the 1990s. “In many ways, the story of the Chernyshevs … is the story of break dancing over the past three decades, with its unlikely journey from the streets of New York to every corner of the globe and to its surprising inclusion, pending a final vote in December, in the Olympics.” – The New York Times 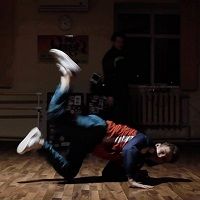