“At its most comical, the Florida Man phenomenon encapsulates the wildness of both America and the Internet. At its most salacious, it’s a social-media update on the true-crime TV of America’s Dumbest Criminals and the gallows humor of tabloid headlines. At its most insensitive, Florida Man profits by punching down at the homeless, drug-addicted or mentally ill.” Reporter Logan Hill travels to a Florida prison to meet an actual subject of a Florida Man story — and he talks with the guy who started the Florida Man Twitter feed about the moral qualms he began to feel. – The Washington Post Magazine 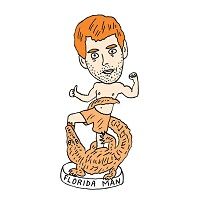