“While it was nominated for two Tony Awards, it did not win any of them. It has no stars, a tiny cast, and no special effects, and everyone both onstage and backstage are Broadway newbies. And yet it has attracted a staggering amount of celebrities to its audience … And it’s written by a woman, features a mostly female cast, and has women as its lead producers, in an industry in which women are still severely underrepresented on every level of production.” – American Theatre 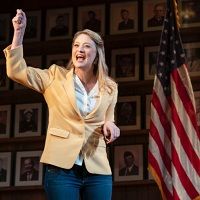