“Acclaimed for his performances of romantic repertoire and his sweet tone, Rosand recorded prolifically and appeared with all the major orchestras around the world, making a particularly busy European career during the 1960s and ’70s,” though he never achieved the level of fame that some colleagues of the same generation did. Rosand also spent more than 30 years teaching at the Curtis Institute, where he had studied as a young man. – The Strad 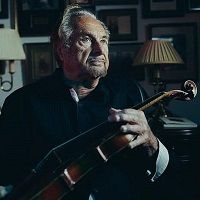