The move follows a widely publicized protest PAIN Sackler held together with the French group Aides Paris outside the Louvre. On July 1, the activists gathered outside the museum’s central pyramid to demand the removal of the Sackler name from 12 rooms in the Sackler Wing of Oriental Antiquities, previously named the Cour Carrée Wing of Antiquities. – Hyperallergic 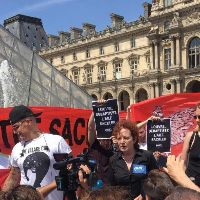