Last week The New York Times reported in detail on YouTube’s recommendation algorithm, which is “capable of drawing users deeper into the platform by figuring out ‘adjacent relationships’ between videos that a human would never identify.” The Crusades are a plum example of a topic that turns into a thread, leading the viewer through a labyrinth towards potential radicalization. You can search “Knights Templar” on YouTube and reach conspiracy theories (“Ten Secret Societies Ruling The World”) within three intuitive clicks.  – The New Republic 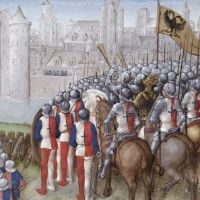